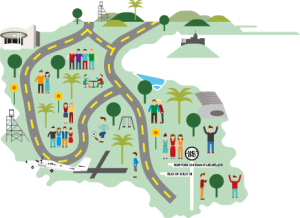 Over the next few months the Company will formalise how the fund will be governed, what criteria and projects will be eligible and the mechanisms for evaluating and awarding funding. It is intended that the fund will be administered by a committee chaired by one of the Group’s non-executive directors with a panel including members of the community without any direct interests in the Company. It is hoped that the first awards can be made before Christmas but this will depend on the priorities and decisions made by the Community Fund Committee after its formation.

Whilst the specific criteria for funding will be partly informed through consultation with the community, it is likely that typical eligible areas for “not-for-profit” project support may include education (all ages), local training & skills, young people, protection of the local environment,  specific community projects, prizes and travel concessions for qualifying mainland or Scilly-based events. Further ongoing top-up funding will be considered by the Company once the Community Fund has been established and its outputs evaluated.

Announcing the fund, Rob Goldsmith the Steamship Group’s Chief Executive said: “Voluntarily, we already provide hundreds of thousands of pounds worth of support annually to the local community through our Travel Club for Scilly residents, sponsorship of the World Pilot Gig Rowing Championship and a wide variety of other ad hoc good causes on Scilly and the mainland. This new fund will represent an even larger commitment to the communities that we serve.”

In the coming weeks the Company will invite members of the local communities in West Cornwall and Scilly to give their views on all aspects of the Community fund and how it can have maximum impact.

Andrew May, Chairman of the Isles of Scilly Steamship Group added: “The Company has deep roots in the communities of Scilly and West Cornwall, stretching back almost 100 years to its original formation. The Company’s success and its best interests have always been inter-twined with those of the community. The Board feels that this new initiative is very much in the spirit of the company’s past engagement with the Islands’ population, and so represents what it hopes will be received as a welcome addition and evolution to the wide ranging programme of social and community activities that we are currently undertaking.  I feel confident that this new Fund has the potential to make a tangible difference to a significant number of people over time.”

The rapid growth in the Company’s diverse operations have helped to support economic activities for the communities on Scilly and in West Cornwall over recent years and it is now one of the region’s largest businesses with over 200 employees. The diversity of the Company’s activities underpin a wide variety of skilled jobs including pilots, marine and aviation engineers, air traffic controllers, fire fighters, marine officers, customer service staff and management. During the last 5 years alone the Company has invested over £10m in enhancing the transport systems between the mainland and the Isles of Scilly.