Daphne Chudleigh was the Isles of Scilly Steamship Groups company Secretary for 35 years, she made a great contribution to the group, notably writing ‘Bridge over Lyonesse’, dating 70 years of Steamship history. Today, we look back at her brilliant achievements and time with the company.

Daphne was born in 1920 in Kingston-upon-Thames, Surrey. Following college, where she learnt shorthand and typing, she joined the typing pool at Hawker Aircraft, also in Kingston and where her Italian father worked as an aircraft engineer. Daphne was soon promoted to “Queen Bee”, head of the typing pool.  During the War she was secretary to the Test Pilots, working with the Hurricane aircraft.  Following the War, she received further promotion and became secretary to the Directors whose offices were in St James’ Square, London.

Following a serious illness, Daphne was advised by her doctor to get some good food and fresh air.  She had previously holidayed in Scilly and decided that the islands would be the place to recuperate. It was during her stay with friend Trevellick Moyle of Rocky Hill that Daphne met Bernard Chudleigh of Tresco and they married in Kingston in October 1953. When Daphne handed in her notice at Hawkers, it was promptly refused, her letter of resignation torn up by her boss.  Never the less, she left London and moved to Scilly with her new husband.

Upon moving to Scilly, Daphne obtained employment book keeping at Fenn’s, now Island Home Hardware.  Her secretarial skills did not go unnoticed and she was asked to take the minutes at an Annual General Meeting of the Isles of Scilly Steamship Company.  She was soon offered a job at the Company, where she remained until retirement. The last five years of her time with the Company, were spent as Company Secretary.

She had been one of the team that had worked with The Department of Transport to try and get parity with the Scottish Highlands and Islands in funding a new ship. This was not possible, but a loan was obtained.  Daphne wrote the cheque for Scillonian III. In 1964, Daphne helped with the arrangements for the launching of The Queen of the Isles and it was through Daphne and her contacts in London, that the Duchess of Gloucester was asked to officially name the ship. In 1977, Daphne was involved with the building and launching of the present Scillonian.

As the day-to-day business of the Company was carried out in the Islands, the daily takings from ticket sales, the ship’s catering and bar, were brought to the St. Mary’s office and then counted and banked by Daphne. Often the small change was carried from the ship in sick bags! Shareholder’s dividend cheques were calculated and hand written with no technological aids other than a calculator.

The Company was also responsible for the Lloyds Agency work within the Islands.  On the occasion of the wreck of the Poleire off the north of Tresco in 1970, Daphne had the harrowing task of taking down verbatim, the account of her Captain as he was being interviewed by the authorities. Sometimes, after lifeboat rescues and the loss of a vessel, the Lloyds Agent had to provide clothing and any necessary funds for the shipwrecked persons to return to their homes. Usually this meant the victim being taken to Simpsons or Morleys (for those that remember) to be fitted out with new clothes.

Most of the Lloyds Agency work was welcoming cruise ships to the islands, organizing trips ashore to Tresco Garden and St. Mary’s. Fred Jenkins would drop Daphne, Rodney Ward, The Company Chairman, Roy Guy, the Pilot and the Customs Officer aboard the visiting cruise ships in his launch. Many of the ships were from the Greek Epirotiki line. When Daphne retired, the cruise ship work was handed over to the St. Mary’s Boatman’s Association.

Daphne worked part-time for the Steamship following her official retirement and it was at this time that she wrote a history of the Isles of Scilly Steamship Company, “Bridge Over Lyonesse”.

Daphne had a great sense of humour, was quite eccentric and always larking around, despite taking her job very seriously. She loved to play practical jokes.  The engineers and shipwrights in the Company workshops were often at the receiving end of her jokes, sending them out for a ‘long wait’ or a ‘sky hook’.

Daphne did not enjoy travel. She never went abroad, though she had planned to visit her uncle and family in Rome before she moved to Scilly.  The Islands became her beloved home of 60 years.  Hers was a life, full and well lived. She died in June 2018 at the grand age of 98.

The Isles of Scilly Steamship Company would like to thank Daphne for her long service and dedication to the Group. 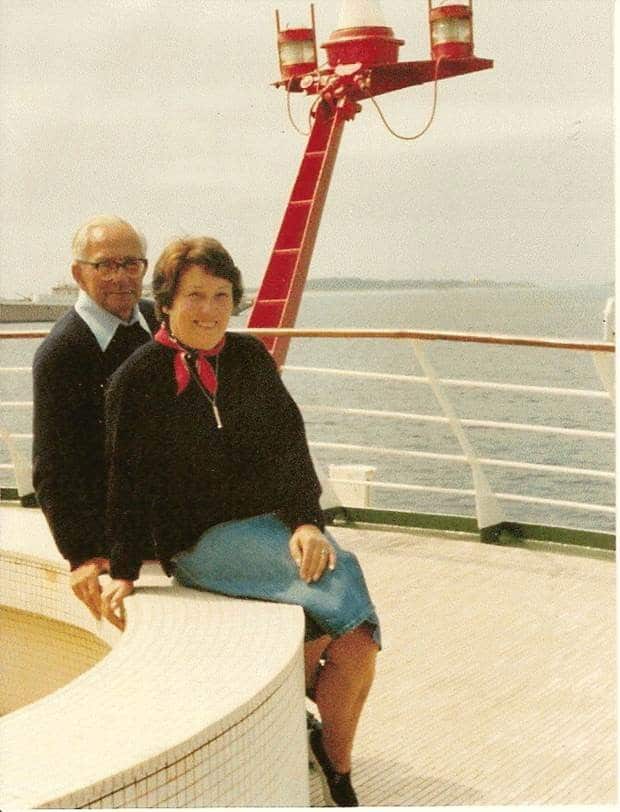