New Chairman at the Isles of Scilly Steamship Group 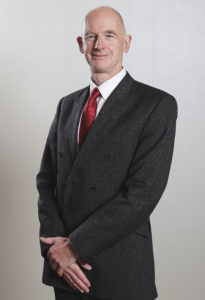 Ian Howard has been appointed Chairman of The Isles of Scilly Steamship Group and will take up the post as of 1st April 2019.

A qualified solicitor, Ian is also President of the British Triathlon Federation and represents it on the boards of the British Olympic Association and the International Triathlon Union. He has just stood down as chairman of MKM Mansfelder Kupfer und Messing gmbh, registered in Germany, as a consequence of the owner selling the company.

Ian brings to the Isles of Scilly Steamship Group a strong track record in business having worked in a variety of senior management and board roles during his 33 year career with Siemens AG, filling positions such as MD for Siemens Corporate Services, CFO for Siemens Business Services and CEO for Siemens Environmental Systems. In parallel, Ian accumulated 15 years’ experience in the Special Air Service reserve reaching the rank of Major.

Ian’s connection to the islands dates back to the early noughties when his sister Gill and brother in law, Alan, worked on Tresco. He has been a shareholder in the company since that time.

The company extended its thanks to Andrew May, who is stepping down after 16 years as Chairman, for his contribution to the business and dedication over the years.

Stuart Reid, Managing Director for the Isles of Scilly Steamship Group said: “I would like to welcome Ian as Chairman of the Board of Directors. Ian brings with him a wealth of experience working in senior roles in high profile companies. The company is entering a new phase in its direction and I look forward to working with Ian in taking the company forward”.

Speaking about his appointment Ian said: “I am enormously privileged to be offered this opportunity. Isles of Scilly Steamship Group is a very special organisation with a unique and indispensable role in the communities of Scilly and Penzance. I am looking forward to working with the company’s board, employees and shareholders to fulfil the company’s strategic objectives”.