Commercial drone service takes off for Isles of Scilly

A pioneering drone delivery flight has paved the way for a new lifeline connection with the idyllic yet remote Isles of Scilly and opened up the prospect of drone operations between airports across the UK.

Today’s successful return flight from Land’s End Airport in West Cornwall to St Mary’s Airport on the Isles of Scilly was the first ever freight drone flight between two UK commercial airports.

Specially sanctioned by the Civil Aviation Authority (CAA), it is breaking new ground in helping to establish rules for drones to operate along an existing and well used commercial air corridor, across two Air Traffic Control areas.

While only 30 miles in distance each way, the flight took the unmanned aircraft over some of the UK’s most rugged scenery and out over the Atlantic, carrying an NHS supply box on the outward leg, and returning with a selection of local produce from the islands, including flowers and artisan gin. 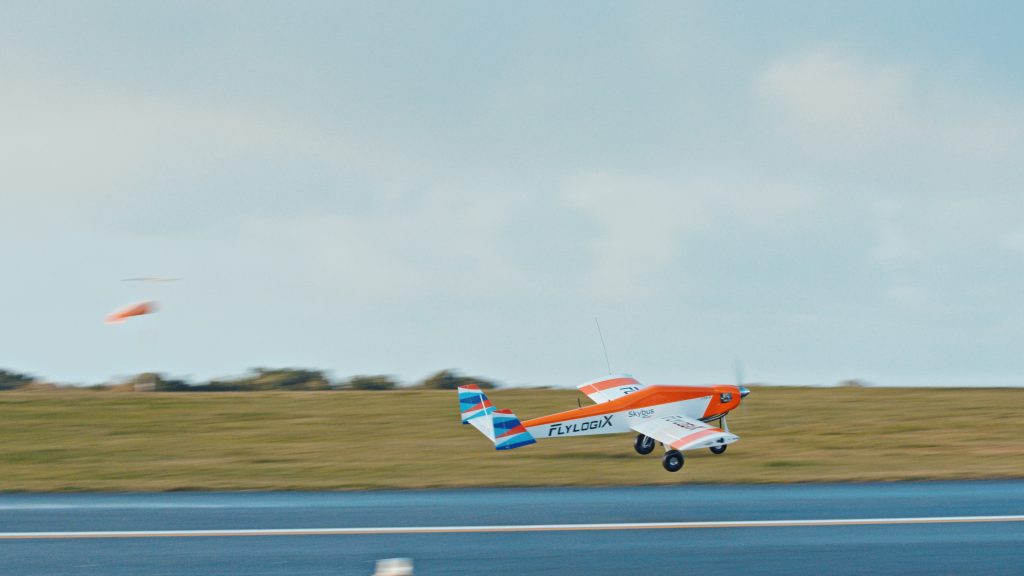 The project is a collaboration between the Isles of Scilly Steamship Company, which for more than 100 years has provided transportation to the islands, and Hampshire-based UAV (unmanned aerial vehicle) company Flylogix, experts in full-service over horizon operations.

They have entered a two-year partnership to develop with the local community what could be the UK’s first scheduled freight delivery service by drone, including plans to develop a larger, purpose-built UAV to meet islanders’ needs. The project is being supported by Cornwall Development Company’s AeroSpace Cornwall programme.

The Isles of Scilly have a population of around 2,200 people who rely entirely on air and sea links for their supplies. Tourism accounts for around 85% of the local economy, with over 100,000 visitors every year, lured by the islands’ stunning natural environment, mild climate and relaxed pace of life.

Stuart Reid, Chief Executive of the Isles of Scilly Steamship Company which has provided a link from the Cornish mainland to Scilly since 1920 and owns Land’s End Airport, said: “When a group of islanders formed the Steamship Company all those years ago they scarcely could have imagined today’s amazing milestone, delivering goods using an unmanned aircraft.

“We’ve shown that a drone freight service is not only technically feasible but that there is demand for its potential to deliver time-sensitive and high value items for the island community, using aircraft that have 98% fewer emission than a manned equivalent.”

Following the successful proving flight there are plans to introduce a daily drone freight service between the mainland and Scilly next summer for a three-month trial period, and work towards a full commercial operation using a bespoke freight UAV within two years.

Charles Tavner, Executive Chairman of Flylogix, said: “This is a very significant test flight because it paves the way for us to work with the community on Scilly towards a scheduled commercial drone service and breaks new ground in the UK for the integration of unmanned aircraft with manned commercial flights. Truly valuable services must be informed by what a community really needs so we are delighted to partner with the Steamship Company to build this new service together”

The move has been welcomed by the Council of the Isles of Scilly, whose Chairman, Councillor Robert Francis, said: “We welcome the news that Flylogix and the Steamship Company have been working together to trial a drone delivery service on the route between Cornwall and the Isles of Scilly. This has the potential to be an important additional delivery option, particularly for urgent or time-sensitive payloads such as medical tests or machine parts. It could also improve resilience for our remote island community during the winter months or periods of bad weather. Congratulations to those involved in this successful first flight.” 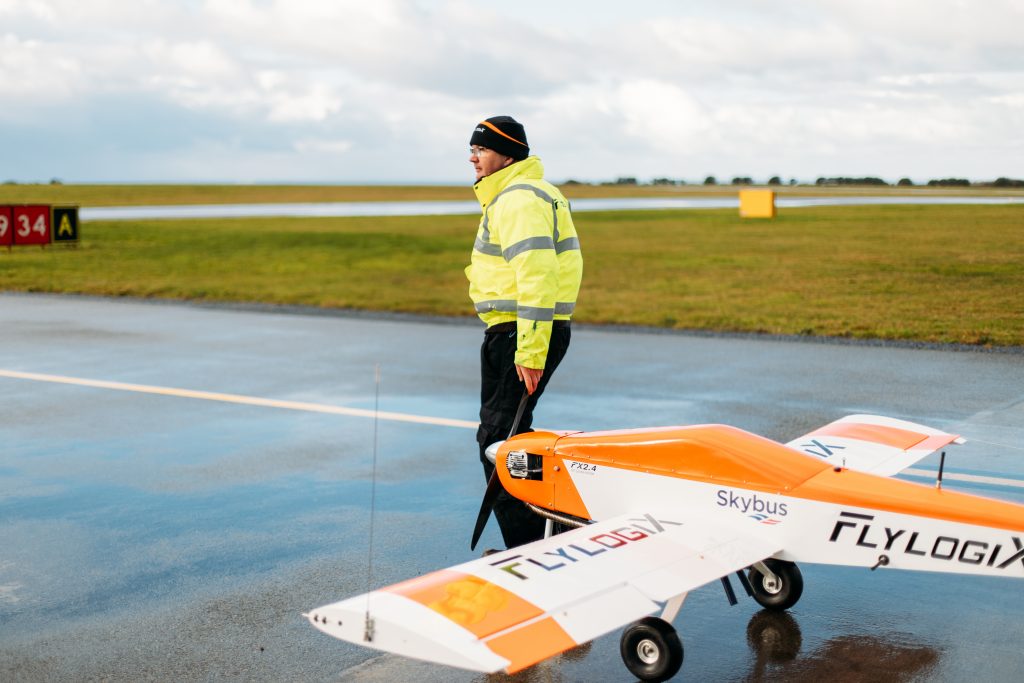 James Fairbairn, Business Development Manager at AeroSpace Cornwall, added: “AeroSpace Cornwall offers funding to businesses working in UAV technology development, and are delighted to have contributed £10k funding to make the first UAV flight from Land’s End Airport happen. Even better to watch it in action, pioneering a new freight service by drone. We look forward to watching the project develop and establish another connection between the islands and the mainland in Cornwall.”

Today’s outbound flight carried an NHS supply box, demonstrating how a drone could be used to carry essential items like medicines, tissue samples and tests to and from the islands. 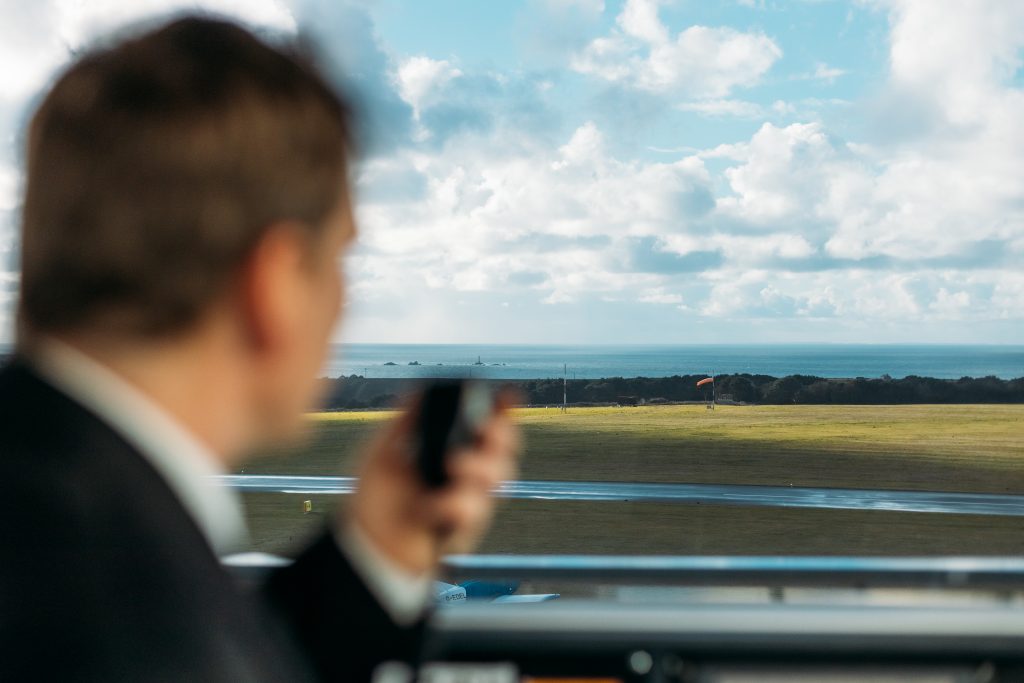 Bruce Daniel is a Pathology Service Manager at the Royal Cornwall Hospital in Truro which performs around nine million tests a year. He is also Incident Director for Covid for the NHS South One Network, covering Devon and Cornwall. He said: “Drone delivery immediately struck me as a possible solution to get any type of pathology sample to the mainland. It also offers the ability to reduce turnaround times for Covid-19 testing for people on the islands.

“I can really see the potential of what it could offer. The drone would be less affected by the weather and could fly in much more foggy conditions. We could use it to transport all different types of blood products from the islands to the mainland. I can see all sorts of benefits both from an islander and pathology perspective.”

For its return flight to Land’s End Airport the drone was packed with a variety of produce from the Isles of Scilly including flowers, gin, clothing and hand sanitiser. Businesses on Scilly have welcomed the prospect of a commercial drone service.

SC Dogs is the first and only rum distillery on the Isles of Scilly, based on the island of St Martin’s, and is run by Andrew Walder and his family. The company distils rum and vodka and its SC Dogs White Rum first went on sale this year. It also produces hand sanitiser as a by-product and a bottle was flown on the UAV.

Andrew said: “The drone trial has the potential to unlock a true next day delivery service for SC Dogs, whether that’s for spare parts, fresh yeast deliveries or shipping our precious products away from the islands.

“With a service that will potentially be less affected by weather issues than other means of transport, this link could greatly benefit our island community especially when it comes to water sample testing, medical deliveries and other vital supplies.”

Arthur said: “As we view St Mary’s airport from our nearby Scilly Spirit Distillery, it is very exciting for Hilary and I to be participating in the very first trial flight, transporting a bottle of our Island Gin.

“This is an important initiative for us all here on the Isles of Scilly, as it opens up the opportunity for an additional service to fulfil the freight needs of the islands, especially when urgent or swift movement of items are needed for the benefit of the community and the many artisan island businesses here.”

The 49° Clothing Company has also welcomed the potential of unmanned aircraft delivering goods to and from the islands.

Partner Georgia May, whose family has run the business since 1973, said: “We are a very busy company, and we get a lot of website orders so we are excited for what this trial could mean for us in the future, especially for frequency of delivery.

“I can really see the potential, not just for our business, but for other businesses on the islands, as well as critical local services.”

Scilly Flowers, based at Churchtown Farm on St. Martin’s, was also part trial. The business has been sending scented flowers from the Isles of Scilly to people across the UK for nearly 30 years. It sends 90,000 gift boxes filled with flowers, via first class post, each year.

Zoë Julian, Partner at Scilly Flowers, said: “Our flowers start their journey by post boat to St. Mary’s before being flown to the mainland. We work closely with the Isles of Scilly Steamship Company to make sure our flowers have arrived in Land’s End and we are excited they asked us to take part in this drone trial.

“It’s still early days for this technology, but it’s an interesting innovation that could potentially revolutionise the way our flowers reach the mainland. We have changed our packaging so our flowers now come wrapped in paper rather than single use plastic sleeves and using drones to transport them to the mainland could move us further along in our ambition to be as sustainable as possible.” 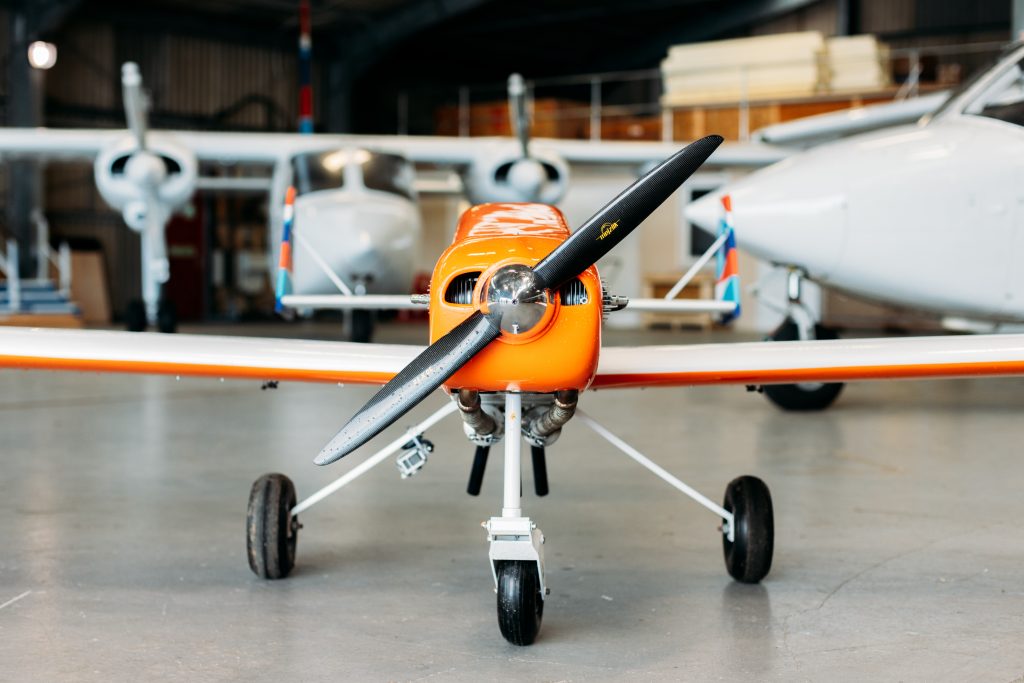