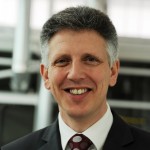 We are pleased to have appointed Robert Goldsmith as our new Chief Executive which will take effect from 4th February 2014.

Rob Goldsmith was selected following a recruitment process that begun last year after our current Chief Executive Jeff Marston informed the Board of his intention to step down after 12 years in the post.

Rob Goldsmith has 24 years of experience within the transportation sector gained throughout the UK and overseas with a specialised background in market development and commercial areas. During the more recent stages of his career, Rob has been the Managing Director of both Bournemouth and Humberside Airports and held strategic leadership positions across Manchester Airports Group, the largest UK-owned airports operator. He has also enjoyed success with major project delivery, customer care and in working effectively with a range of private and public sector organisations.

Our Chairman Andrew May said: “In its 10th decade the Steamship Group is in a particularly exciting time of its development and so it is an excellent time for Rob Goldsmith to join us. To have attracted someone of his calibre is a testament to the professionalism and reputation of the Steamship Group, which remains an efficient, resilient and well resourced lifeline to the islands with the interests of islanders and visitors at heart.

“Rob’s impressive experience across a range of disciplines encompassing major project delivery, customer service and effective engagement with public and private sector organisations, will be a great asset to the Group as we plan to meet our customers’ expectations during the remainder of this decade, and beyond.

“I would also like to thank Jeff for his enormous contribution to the Group’s success over the last 12 years, not least in managing the rapid expansion of the business in 2013. I am pleased that he will continue to act as an advisor to the Board and our new CEO for a short period of time to enable an orderly transition.”

Rob Goldsmith said: “I am very excited about joining the Group at this important stage in its evolution. There have been significant upgrades to services recently by sea and air but there is still much more to be achieved during the period leading up to the Company’s centenary in 2020. I look forward to working in partnership with the communities on the Isles and the mainland to help make this happen.”

We operate a lifeline air and sea services to and from the Isles of Scilly and last year invested a record £3.5 million in boosting capacity and strengthening transport links to the islands, creating 50 new jobs.

This included a £2 million upgrade to our Scillonian passenger ship and work on freight vessels Gry Maritha and Lyonesse Lady to extend their life until at least 2018, and the completion of a new £1 million terminal building at Land’s End Airport. We also leased another Twin Otter aircraft, expanding our Skybus fleet.

This year we are planning further investment in the route, including the hardening of the main runways at Land’s End Airport to make the service more resilient during poor weather.