Fly to Scilly from the UK, Ireland and Europe

Home> Blog> Popular Posts> Fly to Scilly from the UK, Ireland and Europe

Flying to the Isles of Scilly is all part of the experience; there’s no need for in-flight entertainment the open cockpit and bird’s eye views of the Devon countryside and Cornish coastline will have you wishing the flight is longer.

You’ll fly out over the historic city of Exeter — look for the Gothic cathedral. Then it’s over the sweeping uplands of Dartmoor, and the renowned Dartmoor Prison. We then pass over Plymouth, the Royal Naval Dockyard and the river Tamar. 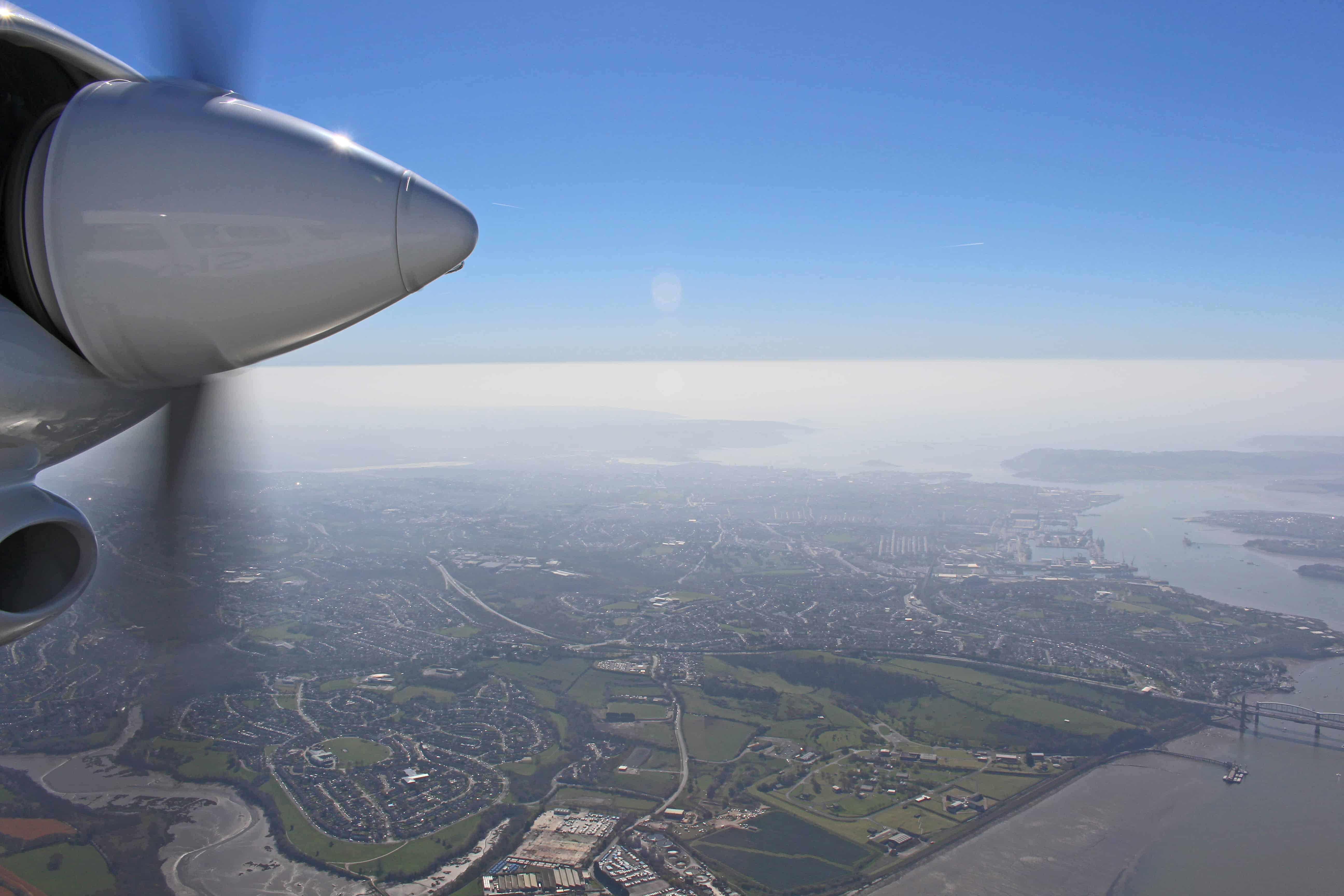 We cross over to Cornwall with views of Looe and Liskeard, flying on to the Eden Project and over the china clay works. Further up the coast, you’ll be flying over Truro Cathedral, the Fal Estuary, Roseland Peninsula and, on your right-hand side, the historic mining towns Redruth and Camborne.

Then it’s spectacular West Cornwall— St. Michael’s Mount, Penzance town, Land’s End and out into the Atlantic, passing over the Wolf Rock and Longships lighthouses before seeing the Isles of Scilly in all their glory. 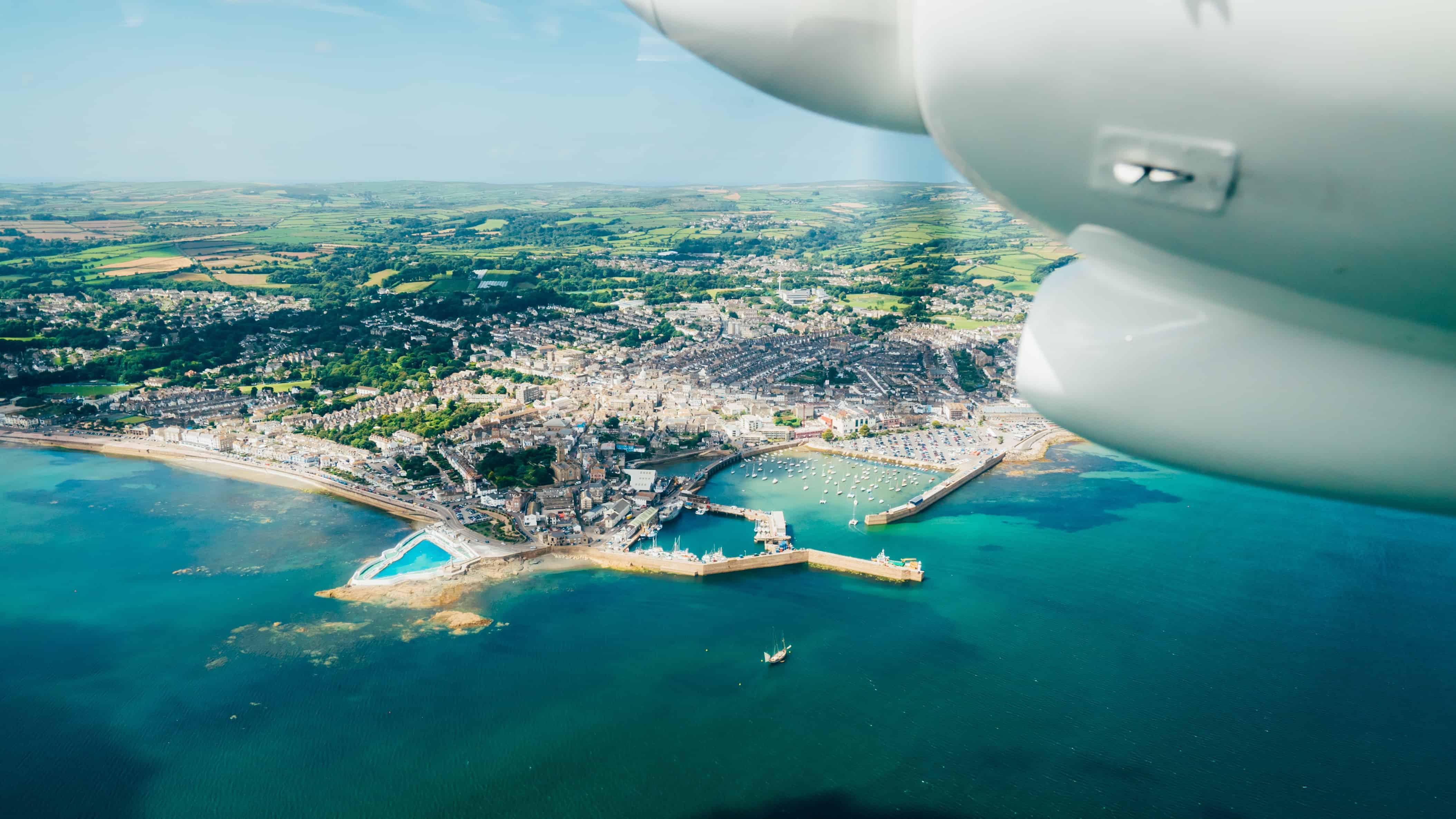 Keep an eye out for the miles of stunning beaches along the North Cornish coast. There’s the popular surfing beach, Fistral, and the miles of golden sands of Gwithian and Hayle Sands (look out for Godrevy lighthouse). 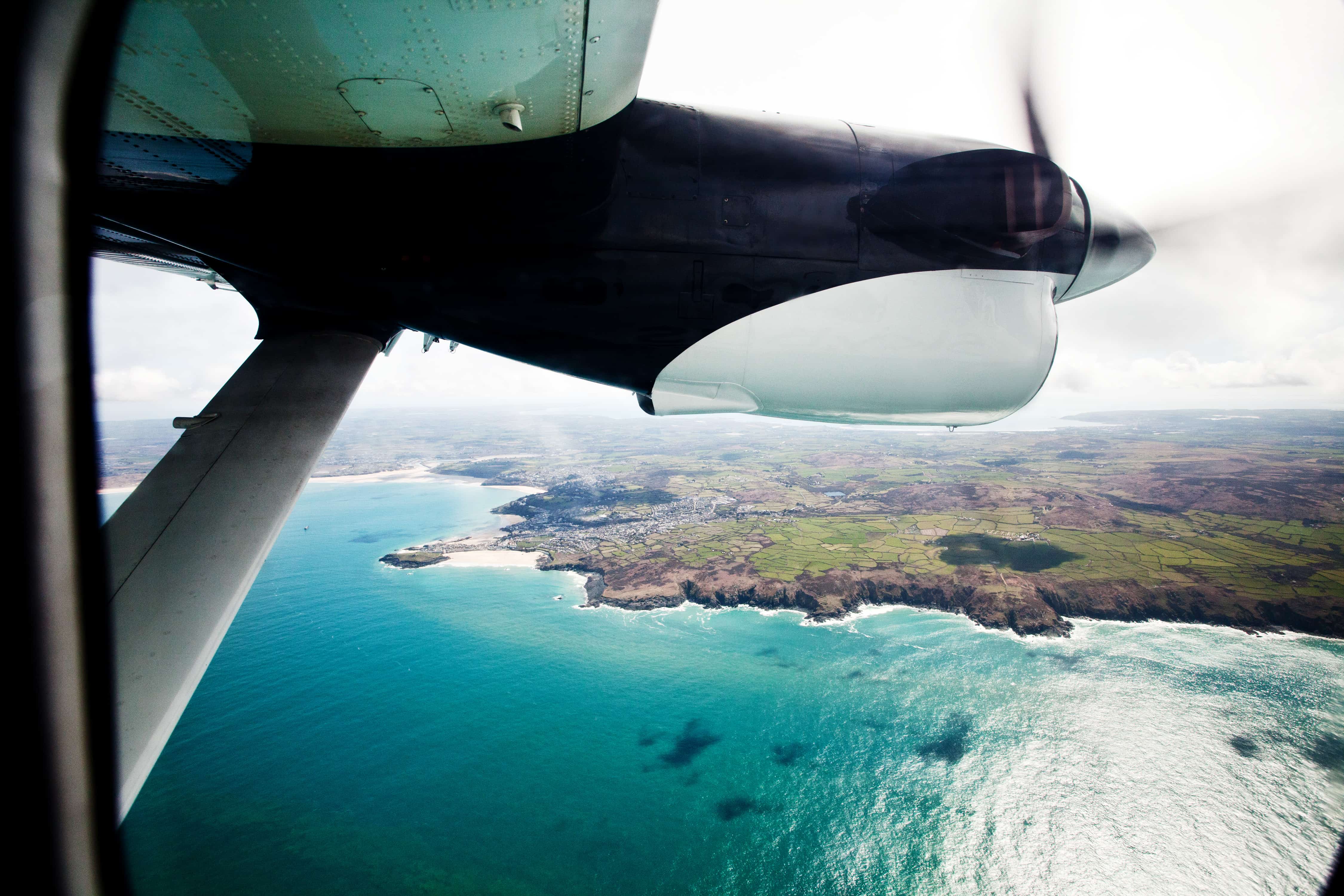 Historic engine houses and mines make a regular appearance along this stretch of coast.

Then it’s onto Cape Cornwall, and Poldark country, Land’s End before approaching the Atlantic Ocean and more iconic lighthouses. The finale is the stunning Isles of Scilly, that somehow looks different on every journey.

This is the shortest journey of the three – but it’s packed with things to see.

Depending on the wind direction, Skybus will either take off towards Sennen cove or fly straight out over the Land’s End peninsula, famous for its jagged coastline — the cause of many shipwrecks from a time gone by. 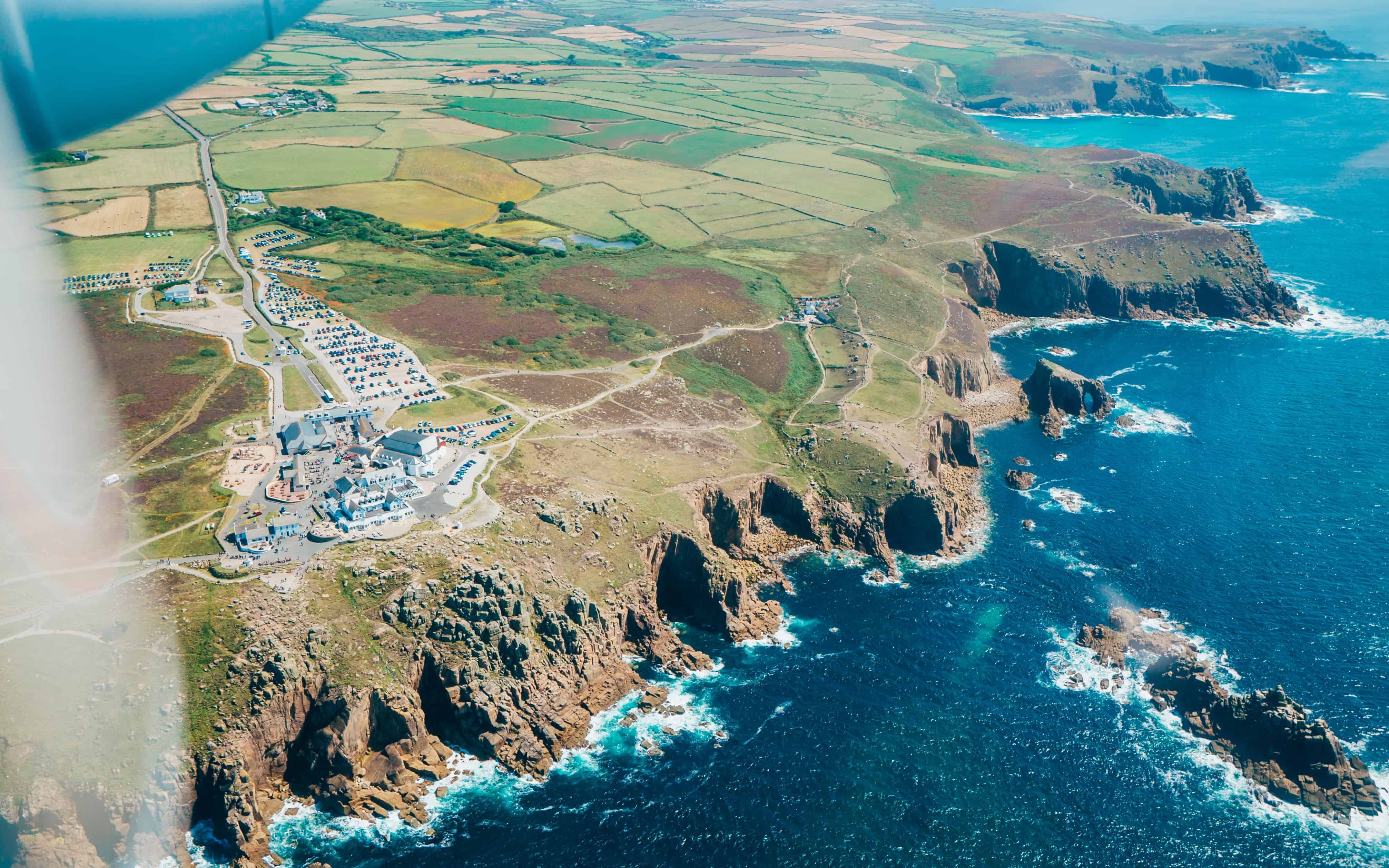 Longships Lighthouse is a prominent landmark on this route, not far from Land’s End, then it’s straight out into the Atlantic, spotting sea life and the Seven Stones Reef for ten minutes (which always feels shorter) before the approach to the archipelago, Scilly. 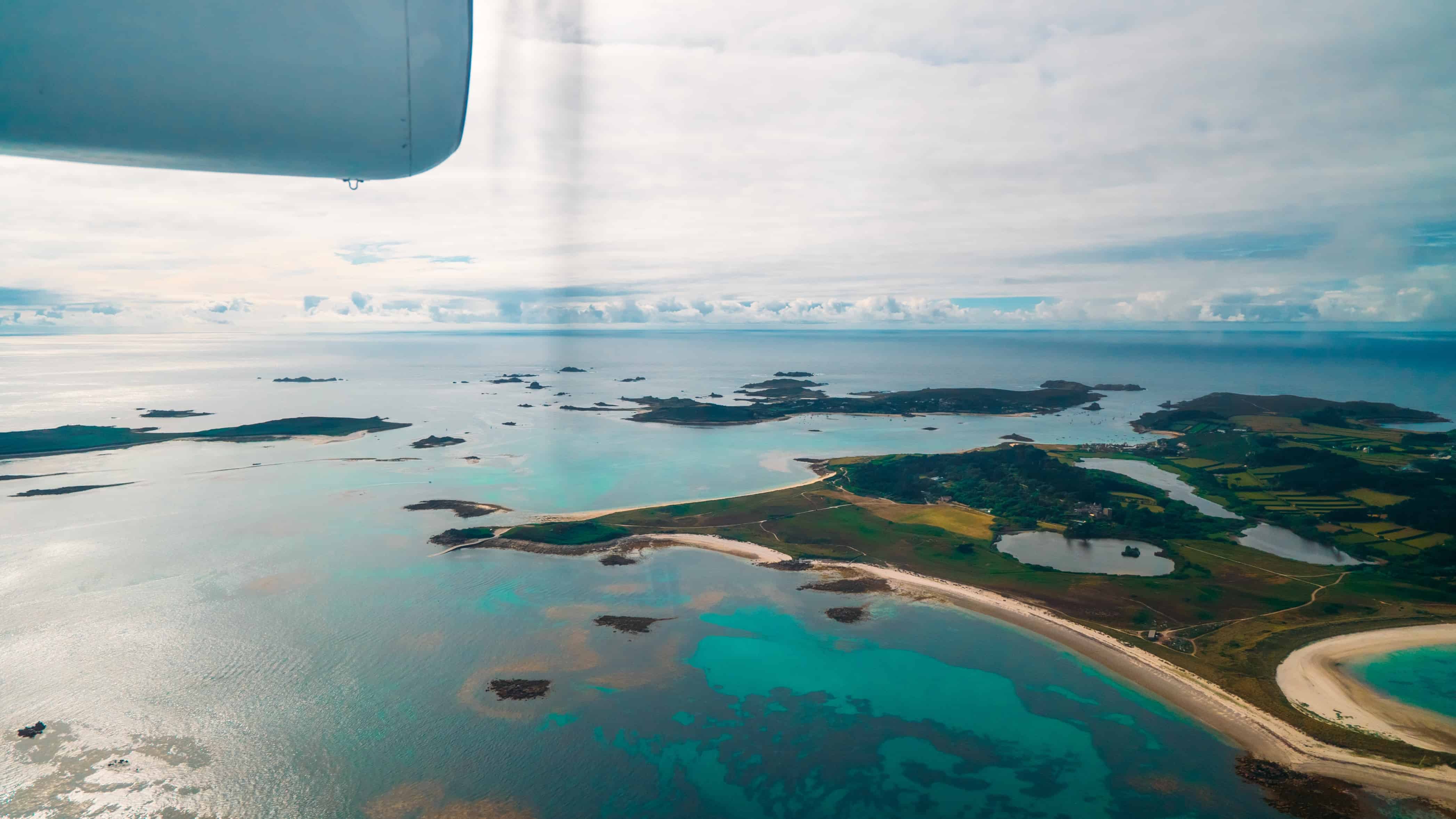